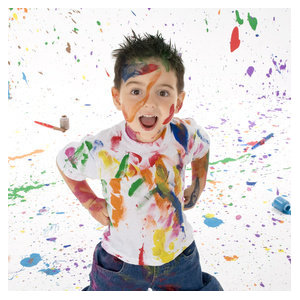 Parents of children with ADHD

Parents often feel sorry for their child with ADHD (and for themselves), but these fleeting moments of pity usually come after a particularly difficult morning! However, one usually recovers from the pity party pretty quickly, because the truth is, if he didn’t have ADHD, he wouldn’t be himself! ADHD is as much a part of him as his big brown eyes and love for collecting marbles or stickies or insects! Many of the coolest things about the child are either a part of his ADHD or a direct result of it. Here are some of them…

Out-of-the-box thinking: He can drive one nuts with his refusal to adhere to “The Rules,” but he often does this in favour of seeking out other, more innovative—or occasionally, more obvious—solutions.

Tenacity: otherwise known as stubbornness! He drives parents and teachers half mad with arguments and tantrums – but he never really gives up and, given a chance, will persevere and resolve whatever problem he encounters.

Curiosity: The ability to perceive detail leads to a heightened level of curiosity. He has Googled and YouTubed everything from air ducts to black holes. No topic is too mundane for this child’s ADHD radar.

Sensitivity: ADHD comes with its fair share of difficulties, as every ADHD parent knows. However, it is awesome to see that his experience with ADHD, especially the more challenging aspects, opens his heart and mind to the struggles of others.

Spontaneity: We are all familiar with spontaneity’s evil twin, impulsivity, and how irritating, and downright dangerous it can be but the flip side of impulsivity is spontaneity. He is always suggesting fun things to do on a whim and it’s never a dull moment from there!

These are just a few of the things one will love about ADHD child. It is so easy for parents to lose themselves in the everyday battlefield of ADHD, to feel like the child might have missed out on a “normal” life as a result of having this disorder. But if we keep reminding ourselves of the many positives that accompany ADHD, we might come to the conclusion that “normal” really is just a setting on the washing machine.